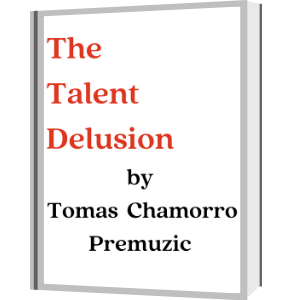 This book was on the reading list for now of my modules on the MSc in Organisational Behaviour at DCU. I found it a short, relatively easy read, with lots of great insights about talent management. ‘Top talent’ being the people who are best at what they do, the stars in an organisation.

Most people are unhappy in their jobs, companies find it hard to fill roles with the ‘best’ people

Talent explains exceptional achievement, over and above luck/ effort

Higher education is ubiquitous and doesn’t differentiate people the way it used to. It shows you are trainable, if you continue to develop yourself

Self-employment and entrepreneurship – people quitting to work for themselves, despite the limited odds of success

Engagement as a driver of performance

But over-supply of disengaged people

Disengagement and turnover intentions, and counterproductive work behaviours such as abuse and theft

The more choice we have, the harder it is to be happy with what we have chosen (the grass is always greener), sites like Tinder & LinkedIn make it all to easy to find “better” alternatives, or at least to see what we are missing out on (see more on this on The Paradox of Choice by Barry Schwartz)

Talent is important because:

It’s hypocritical to ignore talent differences, we need to know how talented people are, and so do they

Talent is measurable and predictable; the problem is how infrequently it is applied to real-world work settings. Few organisations are good at measuring job performance – but individual job performance is ‘the basic building block on which the economy is based’ – usually rely on supervisors & individuals to rate themselves – biased. Also not a great predictor of future performance (when they get it right). Good performers think they deserve a promotion, people with potential could be ignored as they’re not performing. Peter principle – promoted beyond your capabilities, particularly prevalent among manager level

R – how likeable you are, easy to get along with, OCB, EQ (managing yourself, managing others) People skills are a key ingredient in job performance

People work better with others who have a similar level of intelligence – high, medium, low

“It matters not what people think, but what they actually do”

Impression management is a job-relevant skill (dealing with others, colleagues, clients etc)

Treated fairly, challenged, have freedom to meet those challenges

Job satisfaction – what you think. Engagement – what you feel and therefore what you do (behavioural element)

Too much getting ahead, we won’t get along and vice versa

We have the same needs, but not in the same amount or same way

Low scores imply they want to fulfil the opposite

Culture determines the type of psychological rewards provided by a person’s work environment and whether they will match a person’s values, drivers and motives

Organisational ‘climate’ survey to measure the reality of the culture

Culture is dynamic – it never ceases to evolve

Kahn – engagement is a strong psychological association with work. Role playing to the extent you forget you’re playing a role

Flow is an extreme manifestation of engagement

Job performance drives engagement as well as the other way around

Impact of personally on others – reports, bosses, colleagues

Leaders can engage people through a compelling vision and strategy, pushing employees to perform to a higher level, holding them accountable and forming a culture of achievement

Uncoachable – failing to accept mistakes, being immune to negative feedback

Organisations spend much more money on training than on selection. But selecting the right people to begin with would require a lower investment in training

Intelligence and the will to improve/ get better

Most people would like to change their personality to some degree

Even when we behave in an irrational way, it is still predictable

We all become aggregated versions of ourselves

Use a CBT approach

Tools to assess the personality of your coach

The closer the bond, the more the client will progress

People who are valuable to the Org

Strengths-based coaching – but not grounded in science, leaders must learn to develop new strengths, need to be compared to other people, not just their own strengths (normative feedback is required)

Disproportionate focus on positivity – in contrast to the realities of work

Our egos must reflect our reputation

Others are better able to observe your behaviours than you are

Coaching is enhanced when more regular and accurate feedback is given

Unclear and inaccurate feedback can do more harm than good

What others think of us is much more consequential than what we think of ourselves (reputation management), even when inaccurate

Dark side of talent

When people are stressed and don’t have the resources to manage impression, and when people are relaxed they let their guard down

Overcome this with self-awareness, curiosity, entrepreneurship

Self-awareness is the most sought-after competency in executive coaching

Vision – understand the big picture, desire to change the status quo and create a better world

Too many people end up in the wrong job or career which leads to underperformance, disengagement, alienation and massive productivity losses

Can we move to a scenario where most people have been profiled already? Eg of Fiverr but for leaders

What matters is not companies’ ability to make their employees happy, but rather to enable them to perform at a level that surpassed their expectations

Most people think they are ‘better than average’ and when told about this, think it does not apply to them. All facets of life – management, relationships, IQ scores

Over-confidence leads to delusion of competence, in ourselves but also as others see us

Why would we expect people to make the right career choices if they don’t know what their skills are?